These are large polished ammonite fossils still embedded in the rock in which they were found. Many other fossils including clams and gastropods can also be seen in the rock. The ammonites are Cretaceous (Albian Stage) in age or approximately 110 million years old and are quarried in the Mahajanga Province of Madagascar. This is a high quality, museum-quality piece.

Ammonites were predatory mollusks that resembled squid with a shell. These cephalopods had eyes, tentacles, and spiral shells. They are more closely related to a living octopus, though the shells resemble that of a nautilus. Ammonites first appearing in the fossil record 240 million years ago, descending from straight shelled cephalopods. The last lineages disappeared 65 million years ago at the end of the Cretaceous.

We are experiencing a high volume of customers contacting us at the moment. This may mean a delay in our responding to you. Please allow 1-4 weeks for shipment to arrive upon order. 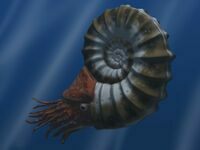 Artists reconstruction of an ammonite. By Nobu Tamura

belong to the large phylum Mollusca, which includes invertebrates. Their class Cephalopoda includes the gastropods (snails and slugs), however the cephalopods are have greater neurologic development. Ammonoidea, Coleoidea and Nautiloidea are sub-classes of Cephalopoda. Ammonites are more closely related to coleoids, which includes the living, soft bodied cephalopods like squid and the octopus. Ammonites descend from an animal called a bacrite. Bactrida were straight-shelled cephalopods of the Devonian (415 mya), though they appeared as early as 390 mya. Both bacritids and ammonids produce vast quantities of eggs, while nautiloids do not. The eggs of bacritids and ammonids contained a small, embryonic shell called a protoconch. The protoconch of Bacritida was globular and small, while the nautiloid protoconch was large. Nautiloids are distinguished by their concave septa which point toward the living chamber and their septae are described as simple compared with ammonoids. Modern nautiloids do not have the bony plate called an aptychus, which is believed to have closed off the opening of the shell, or to have been a structure of the jaw. Ammonites can have straight shells which are described as orthoconic. An example is the Family, Bacculites. Straight shells of Orthoceras are remnants of nautiloids, not ammonoids. Baculites have the elaborate suture patterns famous to the ammonites. Baculites lived in the Cretaceous, while Orthoceras was already extinct in the Triassic period. Ammonoids survived several major extinction events- though in each instance, only a few species survived to diversify before the next event. Their extinction and the survival of the nautiloid may be tied to different reproductive strategies. About 8 species of Ammonites from two Families survived to the end of the Cretaceous. The last lineages disappeared with the dinosaurs during the Cretaceous–Paleogene extinction event, 65 mya.